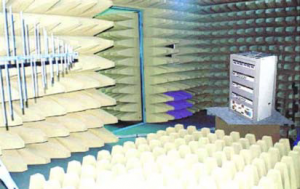 This monday the Perugia group met their project partners at the University of Cassino. The aim of the meeting was to plan experimental activities of electromagnetic compatibility on the magnetic positioning system prototype prepared by the Perugia group.

The prototype has been mounted in the semi-anechoic chamber (see picture above) of the electric engineering department. The system has been tested first without any disturbances to characterize its ideal performances. Then a preliminary conducted immunity test has been performed using a continuous wave coupled through a CDN (coupling decoupling networks).

A set of tests has been planned to be conducted in the next days by the Cassino group. The CDN will be used to couple the system with continuous and modulated waves, exploring several amplitudes and bandwidths. These tests will allow to identify weak points of the system with respect to electromagnetic disturbances and how the latter influence the precision of positioning.

The 6 DOF Finger Tracking project is an inter-academic collaboration supported by the Italian Ministry of Education, University and Research (MIUR) through the grant PRIN 2015 (Projects of Relevant National Interest, project code: 2015C37B25).

The project aims at the development of a new Short Range Wireless Positioning technology, applied to innovative data gloves and wearable biometric systems for biomedical activities